It’s been ages since I’ve found the time to write about Gizmos latest adventures…but he’s had a few recently?! 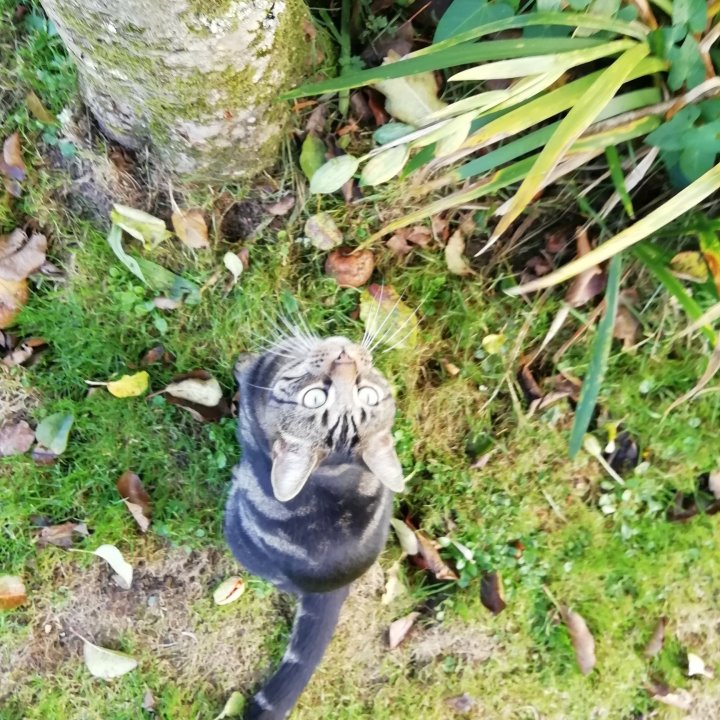 With the dark evenings, and colder weather, Gizmo has been spending the evenings sleeping by a radiator which is probably a good thing – apart from humans trying not to trip over him, at least we know where he is when he’s staying out of trouble!? But one evening last week, he took us all by suprise with his latest gift.

I’m in the living room with my dad and our housemate. The guys were watching TV, and I had my laptop on my knees, excitedly replying to a very important email. The living room door bursts open and Giz comes running into the middle of the room, stops abruptly and drops a large mouse on the floor. For a split second, no one moved… Before chaos ensued!

Gizmo calmly walked away in the direction he entered the room, and the mouse legged it towards the kitchen. By this time, my laptop is on the floor and I’m searching for a box so that I can catch the mouse before Gizmo becomes interested again!

Well, to cut a long story short, the mouse was frantically running round and us humans were doing an awful job of catching it!! That was until it ran across the floor, in front of dad’s foot (he lifted his leg just at the wrong time), and the mouse went up in the air and landed on my laptop. It was like watching a cross between a Carry On film, and Tom and Jerry…apart from Tom was bored by all this! Mouse was then caught and released! Phew…

Yesterday I discovered Gizmo has a slightly sore paw – he seems to have scuffed the pad and it’s a bit red. Poor little guy is soldering on, with occasional lameness if he’s on a hard surface like concrete, but I’m keeping an eye on it. At least he’s doing less running about at the moment, and won’t be bringing any gifts home, right…?!

Imagine my surprise then, at 5am when I hear Gizmo running up and down the corridor this morning, chasing something. By the time I got out of bed, Giz and the mystery animal were in the bathroom, which I thought was pretty ideal! I went in the bathroom, armed with a cardboard box, and turned on the light…before evicting Gizmo from the room much to his annoyance! He continued to run up and down the corridor, squeaking and occasionally sinking his claws into the bottom of the door…

It was a bird, about the size of my palm, cowering under the radiator! I struggled to catch it with the light on, as it started chittering to itself, flying round, and although Gizmo had been evicted from the bathroom, I could hear him in the corridor answering the bird. I decided to turn the light off, and after a few mins in the dark, it flew back to the floor and sat in the corner of the room. I somehow caught it in both hands (but admittedly it was so dark, all I could see was a dark shadow in the corner!), then proceeded to walk to the back door to let it out.

However, it suddenly dawned on me that the back door was locked and it would take at least one hand to unlock it…but I needed both hands to keep the bird enclosed and prevent it taking off and flying round the conservatory.

Somehow I managed to unlock and open the door, removing one hand very briefly to turn the key. Thankfully the bird was still in shock and not trying to fly off. I held my hand outside the door and waited for the bird to compose itself enough to take flight, and after a minute, it flew off! Im no bird expert but I think it was some kind of Finch…with a short dumpy beak, but speckled brown feathers. Very cute, and very noisy when it’s awake!

I hope that Gizmo doesn’t bring any more gifts home today – that’s enough excitement for one day, and I would really like to catch up on sleep!?! 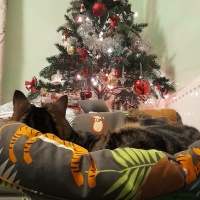 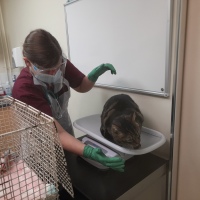