So here we are, 1st March 2018, and to be honest, it’s not feeling much like spring?! Storm Emma is here, and she has brought some ‘white stuff’ with her!?

To get snow in Cornwall is pretty unusual, and for the snow to stick is incredibly rare. But yet here we are, on March 1st, and all I’ve seen for the last few hours is snow blowing in the wind, and settling on the ground.

This was Gizmos first experience of snow, and I can already tell he is NOT a fan!?

He seemed interested in it when he was indoors, staring at it falling through the window. However, when he had the chance to go outside, he was reluctant!?

He hasn’t been outside since 8am, and he must be needing a wee by now!? We have two litter trays in the house for him to use, but he REFUSES… but now he is refusing to go outside too!?

At 6pm this evening, after trying to encourage him to use litter tray, he ran towards the back door! I opened the door, he skidded to a halt, but before he could turn round I picked him up, placed him outside and shut the door behind us.

Once outside, he seemed pretty confused but he skurried around the back of the house and disappeared into the hedge for a few minutes, before running back to the house, eager to get back indoors!

I hope he managed to find somewhere to wee…!? And I hope ‘spring’ warms up a bit in the next few days…!? 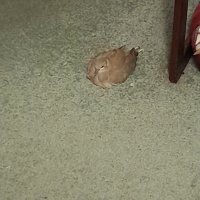