As you may have read in a previous blog post, our Christmas celebrations were dampened by Gizmos ill health and hospitalisation at Penmellyn Veterinary Hospital. (Don’t worry, thanks to the wonderful veterinary team, Giz is feeling MUCH better now and making good progress at home). 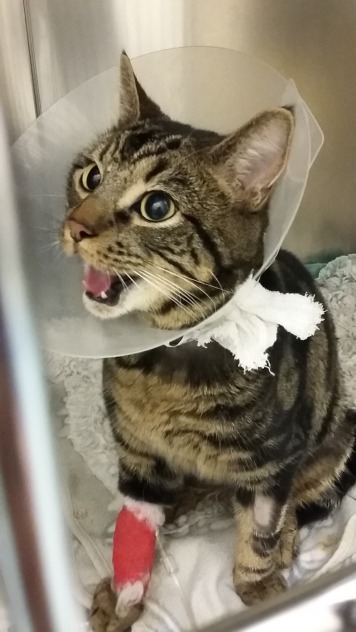 Gizmo ‘singing’ to the nursing staff?!

Gizmo trying to find a way out of the kennel

Before Christmas, you may remember that Gizmo wrote a letter to Santa asking for a cat tree. Basically, Gizmo had outgrown his ‘normal sized’ scratch post, and was therefore sharpening his claws on pretty much everything else in my house. This included the vintage curtains and the wallpaper. Giz seems quite impressed with his artwork; I cant say I agree?!

Gizmo is quite artistic… 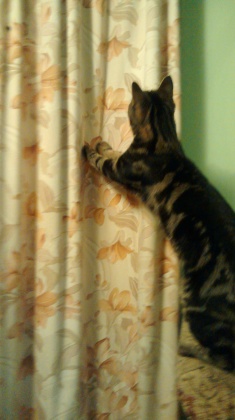 Gizmo ‘rearranges’ the curtains with his claws

Despite Gizmos continued ‘less than desirable’ behaviour, his Christmas wish came true! Unfortunately Santa was unable to fulfil his request due to time constraints and not enough room in the sleigh, but the lovely people at CatTreeUK took on the task instead! Being a tall kitty I knew he needed a TALL pole to scratch on, and with their help, I found the perfect tree! One of my (unusual) hobbies is assembling flat pack furniture, so this tree was a great gift for me too!? I know, I’m strange… *human hangs head in shame*. The tree arrived a few days before Christmas so I had time to set it up and then came the task of hiding it from Giz!? A duvet cover seemed to work quite well…

By Christmas day, I had my suspicions that Giz wasn’t well, having already taken him to the vets on Christmas Eve, so his response to the wonderful pile of gifts he received wasn’t quite what I hoped for. He did open a few presents, but not with the enthusiasm I expected…

I anticipated a catnip frenzy; tearing paper, running around like a child fuelled by excessive E numbers, but Gizmos response was subdued. Too subdued. Too well behaved. Too quiet. Of course I understood that he wasn’t feeling 100%, so we decided to postpone celebrating his gifts until he felt better.

A few days into 2017, when Giz was improving at home, he started to appreciate his gifts! He loves his tree! He can launch himself onto it from a distance, hanging off the rope, and jumping on and off the top sleeping area! And being a tabby kitty, he can easily curl up on his sleeping area and be totally camouflaged! Well, almost totally camouflaged… 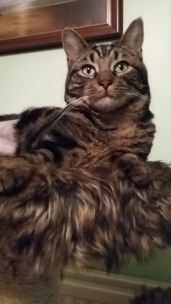 Gizmo posing on his Tree!

As an extra little gift to go with his new tree, I decided to buy him his very own (catnip filled) squirrel to sit in his tree?! I decided that although Giz has come VERY close to catching Mr Squirrel in the garden on more than one occasion, he will (hopefully) never achieve it, so he can have his own squirrel on his very own indoor tree, without having to get his paws wet!?

Gizmo and his squirrel

Giz was also fortunate to receive gifts from Lilys Kitchen, and Tillypops Toys!

Giz loves his stocking of goodies from Tillypops, along with the wonderful Raggati Rug! 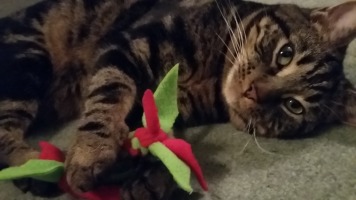 Gizmo and his Tillypops Stocking!

So as far as Gizmo is concerned, he was thrilled with his ‘Zamunda’ Cat Tree (and he still believes that Santa was somehow involved…I didn’t want to upset him by revealing the truth) but unfortunately for me, Santa didn’t bring the new curtains I asked for… Oh well, maybe next Christmas I will get my wish… I live in hope anyway?! A least I’ve still got Gizmos handsome face to stare at…

Thanks to the fantastic team at CatTreeUK who sent me Gizmos tree at short notice! If you are looking for a special tree for your kitty (or other kitty bedding, toys etc), take a look at their website, facebook page, twitter account and instagram account! Gizmo (and his human) HIGHLY recommend…!!

18 thoughts on “Gizmo Got His Christmas Wish…”