Recently, Gizmo has been a busy kitty. He takes his job for KittyKit VERY seriously, and he is dedicated to testing out new products for them each month! He LOVES his job!! He thinks he is the luckiest kitty in the world! (As Gizmos Human Slave, I’m secretly a little envious of Gizmos job..!!). He has also been keeping his paws busy reviewing his birthday presents too!? What a lucky kitty he is! He has also joined Facebook and Instagram this week too!!? 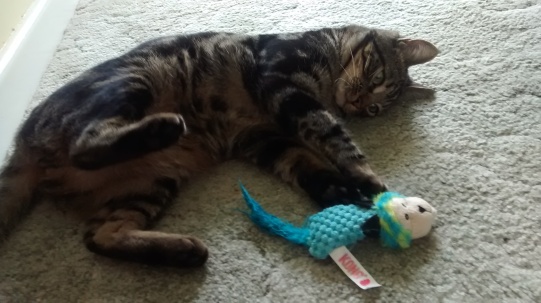 For the last few days, I have felt a bit sorry for Gizmo, and been a little concerned. The wet cornish weather does not agree with him. He does NOT like getting his paws wet outdoors, however, getting wet paws in the kitchen sink is not an issue…?! So for the last few days when the rain has been AWFUL, he has been staying indoors, staring out the window, looking very sad. I’ve tried to cheer him up by playing with him, but he wouldn’t play for long, before going back to the window, or lying down and sleeping.

I did debate whether I should take him to the vets for a check up. I began to wonder if it was possible for kitties to suffer from Seasonal Adjustment Disorder (SAD) as Giz does genuinely seem to be affected by the weather and lack of daylight?! But physically he seems fine, hes just not been his usual naughty self and seemed a bit quiet… Until today that is…

When I got home from work today, he was SOOO pleased to see me, he literally ran around the house for 20 minutes, climbing EVERYTHING he could get his claws into. This included all the usual objects; the sofa, the curtains and the kitchen wallpaper?! He even attempted to scramble up the back of the leather reclining armchair, but this was less successful, as he didn’t have enough traction and was ‘wheelspinning’ for a few terrifying seconds?! He  then got so excited that he got himself wedged in behind one of the big sofa cushions?!

Even though the weather is drier today, he is still choosing to stay indoors. Mind you, he needs to snooze now, to regain the energy that he wasted earlier…?!! I’m sure ‘normal Gizmo activities’ will resume at 2am when I’m trying to sleep…?!